We still talk about Mother Earth. She’s a mom in a lot of religious traditions, not just that of the ancient Greeks, and it is also true that there are plenty of earth-related mother-affiliated goddesses in the Classical and pre-Classical pantheon who weren’t the Earth’s personification. But when Mahud, of Between Old and New Moons, suggested doing a synchroblog on Landscapes and Mythology, Gaia seemed to be the appropriate goddess to discuss. 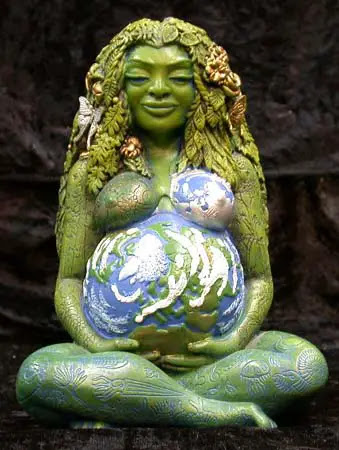 A powerful Gaia does not seem to fit into the heady, patriarchal world embodied by philosophers like Plato and Aristotle and ruled by male gods from their heavenly thrones on Mt. Olympus. As goddesses go, she was much less about the adventuring and talking, and much more about the Being. She was, literally, Earth. Her name, in its various grammatical forms, is the word Earth whether you are attempting to be religious or not. To put it another way: she doesn’t necessarily have a personality because it is more important that she IS the earth, than that she be an actor in stories.

In fact, the only stories in which Gaia plays a really active role are pre-human, namely the creation myths wherein the power of heaven is passed from father to son to grandson, all through the machinations of Gaia and her daughter Rhea. When the story begins, it is a powerful Gaia - a goddess with opinions and the ability to give birth without the aid of a male - who is determining the course of the world. Then her partner tries to stunt that power by stuffing their children back into her womb. She wasn’t having it, and Aphrodite is born from her erstwhile lover’s severed sexual bits. Then, when Rhea and Cronos were more in charge (put there by Gaia), Cronos tries to swallow all of their children. Again, the mother goddesses weren’t having it and they overthrew Cronos and passed the reins to Zeus. When he felt threatened by the same cycle - what with having children stronger than he by virtue of a hardcore mama - he not only swallowed the child, he swallowed the mother. Athena, the product of that union, was very strong but her lack of mother kept her from challenging her father even when he transgressed against the mothers’ wishes (stuffing Gaia’s children back into Tartarus, for example). And Zeus was now doing what only Gaia could do when this started: having babies all by himself. And the cycle ended.

Outside of this creation myth, we rarely see Gaia enter stories, let alone take as active a role as castrater or King-maker. And that is because it is in this story that Zeus, as the leader of the Classical pantheon, usurps the power of reproduction, or fertility, and yes, even of the land itself.
—–
Other participants in this synchroblog on mythology and the land include:
The Aquila ka Hecate (King and the Land are One)
Symbolic Landscapes of the Norse Mythology (A. Venefica’s Weblog)
Executive Pagan (Nature and Me)
Manzanita, Redwoods and Laurel (The Importance of Local Landscapes)
the dance of the elements (landscape and mythology)
Druid’s Apprentice (Landscape Synchroblogging)
Quaker Pagan Reflections (Gone Away)
Pitch313 (Transcendental Experience Out Of Doors Opens The Gateway To Magic )
Between Old and New Moons
Mythprint
Posted by Ailia at 10:18 PM 0 comments

Greek Myths in the classroom, Pt 1

Greek mythology is taught in public primary and secondary schools across the country. Although, personally, I quite enjoyed teaching my peers what I had memorized out of D’Aulaire’s Greek Myths (our 6th grade text book for the subject), and loved the excuse to dress up and act out the role of Artemis, I have to admit that the purpose of the topic’s inclusion in our curriculum as determined by the powers that be has long escaped me.

Yale’s helpful publication on teaching Greek and Roman mythology lists the objectives as primarily and secondarily about standard school junk like vocabulary and reading skills, but the third objective involves the idea that, “In our rapidly changing world, the realization of some kind of continuity in the human race is very comforting and perhaps essential.”


Really? Is that why ancient Greek myths are so appealing?

More importantly, is reproducing the concept of an unbroken eternal symbolism that we can all comfortably and uniformly recognize really something we want to be teaching our youth? Isn’t it way more interesting that, like, these stories DON’T mean the same things to us now that they meant 2,000 years ago and yet we still think they’re cool? Isn’t it awesome how, even though only something like .4% of United Statesians self-identify as Greek, we still perceive ourselves as collectively descended from Greek greatness? And by awesome I mean, totally bizarre and fascinating.

I like to keep my entries short so I’ll stop here for now. But tell me, what do YOU think about the State perpetuating this mythical ancestry? Or do you think something completely different altogether?
Posted by Ailia at 10:11 PM 0 comments

The Theogamia was this ancient Greek festival celebrating, literally, the gods’ marriage. All the rituals took place in the temple of Hera, and the whole thing appeared to be in honor of the goddess in her role as Protectress of Marriage. Now, when we talk about Hera these days, we tend to discuss her primarily as the shrewish cucquean who caused so much trouble for Zeus’s flings and for Heracles. But despite the common depiction of her as vindictive and vain and her marriage as a battleground, there are still myths in which she and Zeus are assumed to have a solid relationship.

Furthermore, she’s a goddess that women can identify with, she works hard, not just to get rid of the competition, but to make herself the best wife she can possibly be. She bathed once a year in a sacred spring to restore her virginity - that oh-so-important status for Greek women - and even borrowed Aphrodite’s divine girdle to make herself extra sexy for her man.

The Theogamia, says Mikalson in The Sacred and Civil Calendar of the Athenian Year, may have been celebrated exclusively by women. It seems possible that if ever having only myths written down by male authors would make a difference in the illustrating a particular goddess, it would make a difference in the imagining of Hera. What I wouldn’t give to be able to travel back and meet a woman celebrating this festival and ask her what myths the millenia have allowed to fade. The Theogamia was celebrated on the 27th of the month of Gamelia - the lunar month generally associated with January - and I think that would make the correct time to celebrate it right about now!