First of all, this blog is part and parcel of the larger website: www.paleothea.com - Women in Greek Myths. 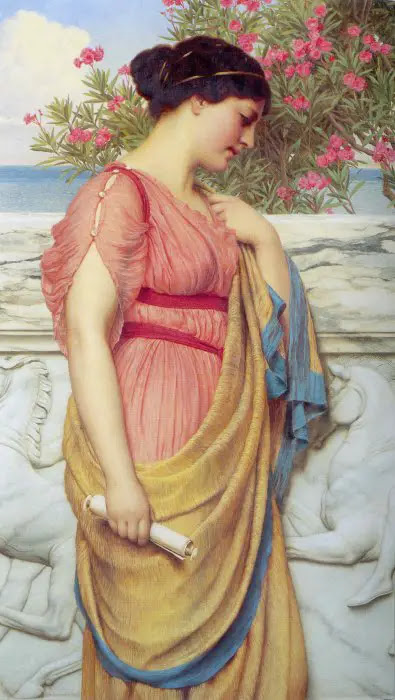 Paleothea is meant to mean “ancient goddess,” paleo meaning ancient and thea meaning goddess. Secretly, I would have been better off calling it palaithea - that would have been more correct in ancient Greek - but what’s done and done and you don’t really care, do you?

I have slowed way down on adding to the main site. I do, however, keep up with what’s going on in the field, and from time to time I will come here and report on such things. I also expect to talk about art, good books, and my own experiences (as they relate to Women in Greek Myths). I welcome comments, discussion, and even contributers to blog! (Email me if you’re interested in that last bit.)

Paleothea.com was born out of my personal interest in Greek myths - particularly the lesser discussed myths about women - when I was 13 years old (back in 1996) and wasn’t really meant to be a definitive source for anybody. My particular interest, the reason I thought it was worth having a separate site, was that, at the time, there was virtually nothing with pictures alongside the stories. Personally, I think the pictures add a lot; they both aid in visualizing and realizing the stories and people and tell us a good deal about what aspects of the stories are important to people today. That said, I am always interested in hearing what you like and would like to see more of.

It feels a little weird to be writing about myself here … but I suppose since the site has become something that other people are citing, I ought to locate myself. I am a recent graduate with a major in Ancient Greek Language and Literature, a feminist (in the 3rd wave sense), and the rest I’ll keep to myself. I don’t know how relevant this explanation is to the readership, but those are a couple of big points of my identity. In addition to being an ancient Greek major, I am particularly interested in culture studies, gender studies, and tend to believe that everything comes down to issues of identity. That said, I love the myths not so much for what they can tell us about the world in any objective sense, but because I think they themselves are awesome. I am not a professor or a professional academic (yet) although I do hope to be at some point.

My real name, that is, the one I use in my “real life” (heh) is not Ailia Athena. I’ve been considering posting it here, but the name is the only connection this site has to its beginnings, so I will probably leave it be. If you are citing me, Ailia Athena is my nomme de plume (like Mark Twain instead of Samuel Langhorn Clemmens) and thus all you need to know.

One question that has come up from time to time is whether you should trust what you read on this site. The answer is an unashamed no. Although I try really hard to verify my sources and correct things that I wrote long ago (as I mentioned, this site has been in the making since I was 13 and before I knew anything about anything I had a whole lot of misinformation) the only sources you should really “believe” are the original sources (the Homeric Hymns, Hesiod, Ovid, Apollodorous, etc.). If you are doing real research, you should check out those original sources or email me for my sources on whomever you’re interested, or go to a site that gives you direct citations (like theoi.com).

One last thing about me: my favorite myths, goddesses, and women tend to change with my mood, but generally, I like the ones who challenge and/or typical constructions of gender (check out Agdistis and Iphis for starters).